The MN Certified Food Managers and a 15-Dollar Minimum Wage 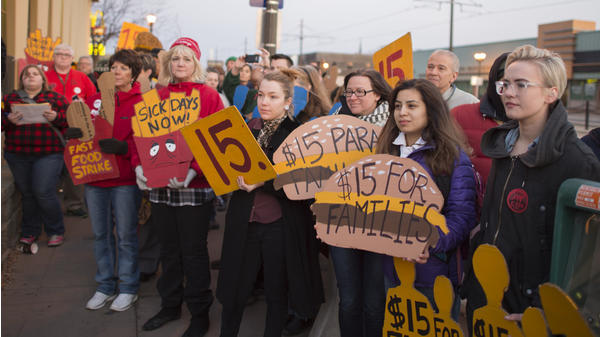 During the course of providing HACCP training certification classes, we hear many MN certified food managers discussing how a rising minimum wage may impact their businesses. This issue potentially affects local companies, especially in light of recent attempts to place a 15 dollar minimum wage initiative on the upcoming November ballot in the city of Minneapolis. Recently, the Minnesota Supreme Court ruled that a minimum wage increase cannot pass by a voter initiative, but control over the issue remains with the city council. Even so, since the food service industry hires a high number of minimum wage workers, we felt it beneficial to briefly explore the issue.

The MN Certified Food Managers and a 15-Dollar Minimum Wage

We hear several concerns from MN certified food managers whenever the topic of a higher minimum wage arises:
• Profit margins will drop
• Labor costs will force them to reduce the workforce
• They will lose tipped employees if customers refuse to tip
• They may have to close or move outside of city limits

The top two concerns that food service managers voice directly involve finances. Anyone who controls the books in a restaurant knows that the margin between cost and profit is extremely tight. While fears of being able to operate a restaurant in a high minimum wage environment are valid, restaurant.org suggests that states such as California, where higher minimum wages exist in cities such as San Francisco, are forecasted to see record growth.

While a high minimum wage directly affects labor cost, one theory suggests that adding more money into the economy will bring more customers into local restaurants. Younger workers tend to benefit the most from a higher minimum wage, and some economists feel that if the younger workforce receives more money on their weekly paycheck, they are more apt to spring for luxuries such as dining out. This unproven theory makes sense, but many business owners hesitate to risk their livelihood on something that has yet to be studied.

Finally, many tipped employees worry they will earn less due to customers not tipping in high minimum wage cities. Some restaurateurs suggest that a guest will be less likely to tip if they know that their server is making 15 dollars an hour. This can take a big portion out of a server’s paycheck, and we have heard that many servers feel that a high minimum wage will reduce the amount of money they make if they choose to stay employed in restaurants in Minneapolis should they raise the minimum wage.

Both advocates and opponents of higher minimum wages passionately argue their sides of this issue. If any changes to our states minimum wage laws take place, we will cover the ramifications and new regulations in deeper detail.

For over 20 years Safe Food Training has been known as the # 1 provider of food manager certification in Minnesota. We offer both instructor lead and on-line food safety certification courses. Our instructor lead courses are regularly scheduled at several central Minnesota locations. If you have special training requirements, we can even customize ServSafe training for your group. Which ever option is best for you, we would be happy to serve your needs.